Women’s Nordic Combined has a future both in Russia and all over the world! 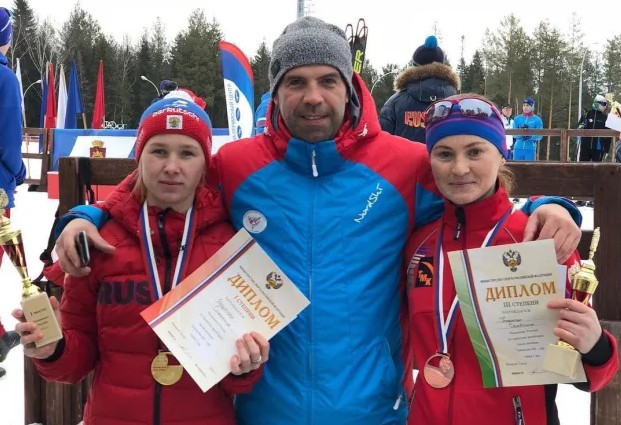 Denis, how do you assess the past winter season? Which plusses and minuses do you have in your analysis of the season 2018/19?

Denis Tishagin: For us, the last season was hard. The leader of the team, Stefania Nadymova, was injured and she was recovering almost the entire winter season, while other girls could not yet replace her.

In past years, you worked only with two girls, now you are working with the whole team. What has changed for you?

Tishagin: This year, our Federation President Dmitry Dubrovsky decided to create a women’s team. During the past two seasons, only junior staff was financed but a full team has now been formed: Stefania Nadymova, Svetlana Gladikova, Anastasia Goncharova and Glafira Noskova. Olga Aristova and Alexandra Glazunova have individual training plans. But, of course, after the Summer Russian Championships this list could be corrected.

My work is very interesting. I feel a special responsibility for the new athletes in my team. It is necessary to create the right methodology for them.

How did you arrange the preparation for the summer season? What did you focus on?

Tishagin: We started the preparation in May, unfortunately, without Anastasia Goncharova because the national team lists were not agreed on for a long time. We held camps in Kislovodsk and in Chaikovskiy. Right now, we have just returned from Sochi where we have lived at an altitude of 1400 meters.

Are you planning to start at the SummerGrand Prix later this month?

Tishagin: Yes, the main focus of the summer period is the Grand Prix in Germany. The main goal is to fight for medals. Anastasia Goncharova, Stefania Nadymova and Svetlana Gladikova will start in all competitions. The junior group will stay at home and compete at the Russian Junior Championships.

What do you think about the  newly introduced mixed team event? Which results  in this event can Russian fans hope for?

Tishagin: The fact that the mixed relay was introduced is a great achievement for both women’s and men’s Nordic Combined in general. For the Russian team it is a real chance to fight for the top six.

Tishagin: Our main goal is the FIS Nordic World Ski Championships 2021 in Oberstdorf. We have time to create optimal training plans, team supply, to work out all nuances. We need to add resources in all directions. All women’s teams in Russian Nordic Combined are involved in preparing for this important step already.

We hope for the support of the Ministry of Sport of Russia and the Federation represented by our main sponsor, the company «TMK», and President Dmitry Dubrovsky. Women’s Nordic Combined has a future both in Russia and all over the world.