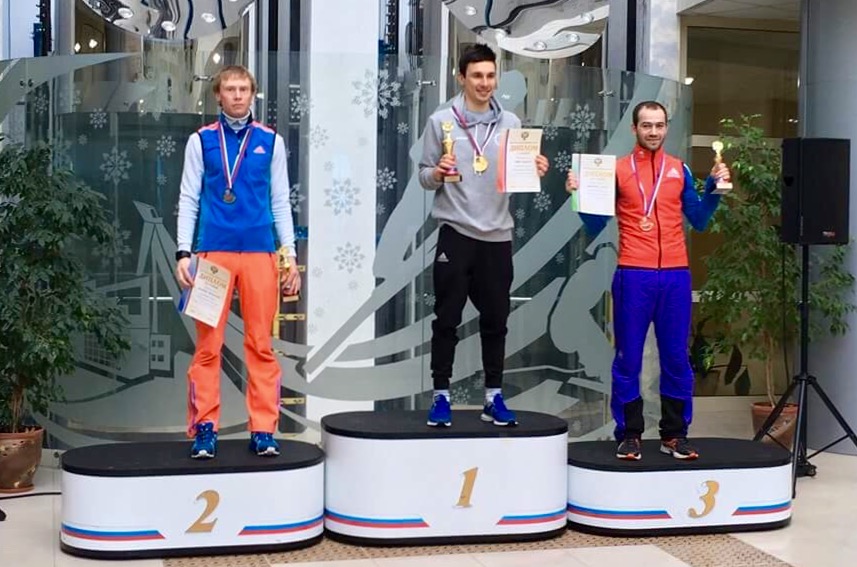 As in France or in Estonia Russian Nordic Combined skiers also picked this week to hold one for ladies and four for men National Championship events in Chaikovskiy.
The ladies’ jumping competition on Thursday ended up with a victory of the first Ladies Continental Cup winner Stefania Nadymova (Perm Region). She jumped only on 78 meters but it was the best jump of the day. 74 points gave her an advantage of 58 seconds on Svetlana Gladikova (Perm Region) who showed 72 meters (59,4 points). Aleksandra Glazunova (Sankt-Petersburg) was the third with 1 minute and 4 seconds behind the leader.
A total of 16 ladies took part in the following 5 km cross-country race and here, Nadymova beat here opponents. In the end, 35,2 seconds separated her and Anastasia Goncharova (Krasnojarsk Region) who finished the second. Gladikova finished the third with 45,9 seconds behind Nadymova. The fastest skier on the track was Larisa Skriabina (Moscow Region/Perm Region) with 14:48,5. She improved from rank eleven to the final seventh position.
On the men side, Ernest Yahin (Bashkortostan) had already been in the lead after the jumping round. With 96 meters he had a head start of 23 seconds on runner-up Aleksandr Milanin represented Moscow/Magadan (95,5 meters). Niyaz Nabeev (Tatarstan) jumped on 95 meters and took the third position.
Although Viacheslav Barkov (Moscow) was very fast in the cross-country race and tried very hard to come the first, he still could not catch up with Ernest Yahin. In the end, 7,1 seconds separated the two, with Barkov working his way to the silver rank from the seventh position. The fastest man of the race, Samir Mastiev (Sverdlovsk Region), became the third. Alexandr Pashaev, Vitaly Ivanov (both Sankt-Petersburg) and Dmitriy Gelvig (Sverdlovsk Region) completed the top six.
The Team Event was clearly won by the team Sankt-Petersburg I, consisting of Ivan Konoplev, Ivan Pronin, Alexandr Pashaev and Vitaliy Ivanov who had already been in the lead after the ski jumping round with 385,7 points over the 346,1 points of the team of Bashkortostan (Artur Husnutdinov, Vladlen Dotsuk, Roman Sidorov and Ernest Yahin). By the way, Yahin showed the best jump of the day (101,5 meters) but in cross-country race his young teammates couldn’t support their leader and ranked sixth after 4 x 5 km of cross-country skiing. In the end, the team of Sverdlovsk region I finished 2 minutes and 58,3 seconds after the winners and took silver medals. The third spot on the podium went to the first team of Moscow Region (Konstantin Abramov, Nikita Oks, Timofey Borisov, Denis Agunov). Though Agunov was disqualified in the ski jumping round his team turned the fifth place after jumping into the third place after the cross-country race by finishing 3 minutes and 17,3 seconds after the team of Sankt-Petersburg.
On Sunday, the wind conditions didn’t allow athletes to compete and jury decided to use the results of the Saturday’s PCR for the cross-country race. «The wind wasn’t so strong but it was little bit dangerous to jump in these conditions. I wasn’t satisfied by my jump on the normal hill but yesterday everything was perfect!» Ernest Yahin said. He jumped on 140 meters and this outstanding distance got him the pole-position (147,0 points). With 129,5 meters Alexandr Milanin took the second place (119,7 points), Niyaz Nabeev, who was celebrating his 29th birthday, occupied the third place (110,4 points).
Ernest Yahin kept his first place in the cross-country race and finished in 2 minutes and 12 seconds ahead of Viacheslav Barkov who beat Samir Mastiev on the 100 final meters. Dmitriy Gelvig, Alexandr Milanin and Timofey Borisov enetred the top-6, too.
On the 2nd of April, the Team-sprint race had a place. It was the final event for Russian Nordic Combined skiers in this Olympic season. The team of Moscow Region (K. Abramov/T. Borisov) was the leader after the jumping part. The Moscow duet (A. Milanin/V. Barkov) was the second and lost only 14 seconds to the leader. A. Pashaev and V. Ivanov (Saint-Petersburg) started in the cross-country race the third with 1 minute and 49 seconds backlog. On the 15-kilometers track the team of Sverdlovsk Region was the strongest. Dmitriy Gelvig and Samir Mastiev started with the fifth position but they beat all rivals and finished the first. Konstantin Abramov and Timofey Borisov lost 4,6 seconds and took the silver medals, Alexandr Pashaev and Vitaliy Ivanov became the third. Moscow team couldn’t keep the prize-position and finished only with the fourth result.
Winning 2 gold medals, Ernest Yahin became the most successful athlete of this Championship at the time as Mastiev won the largest number of medals (1 gold, 1 silver and 2 bronze awards).
Anastasia Shuhova